Could it really be?

Could it really be that the Scriptures are indeed both inspired and sufficient?

“All Scripture is breathed out by God and profitable for teaching, for reproof, for correction, and for training in righteousness, that the man of God may be complete, equipped for every good work.” 2 Timothy 3:16, 17

Where can we see this being carried out in a supernatural, prophetical and physical way? How about in the early presentation of the Gospel of Christ and in the terminology of the Scriptures? 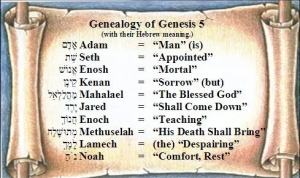 For those of you who have never seen this before, read Genesis chapter 5. I first learned about this from Dr. Chuck Missler and studied it early in my salvation. I have never forgotten the lesson that God’s word is so much more than I could ever know. It drives me to study His word, apply His word and to simply read and enjoy the true of His word. Read the break down of Genesis 5 below or the entire article here. You can also watch the video clip.

A Study of Original Roots

The meaning of proper names can be a difficult pursuit since a direct translation is often not readily available. Even a conventional Hebrew lexicon can prove disappointing. A study of the original roots, however, can yield some fascinating insights.

(A caveat: many study aids, such as a conventional lexicon, can prove rather superficial when dealing with proper nouns. Furthermore, views concerning the meanings of original roots are not free of controversy and variant readings.)

Methuselah comes from muth, a root that means “death”;1 and from shalach, which means to bring, or to send forth. The name Methuselah means, “his death shall bring”.2

Methuselah’s father was given a prophecy of the coming Great Flood, and was apparently told that as long as his son was alive, the judgment of the flood would be withheld; but as soon as he died, the flood would be brought or sent forth.

(Can you imagine raising a kid like that? Every time the boy caught a cold, the entire neighborhood must have panicked!)

And, indeed, the year that Methuselah died, the flood came.3

It is interesting that Methuselah’s life, in effect, was a symbol of God’s mercy in forestalling the coming judgment of the flood.

Therefore, it is fitting that his lifetime is the oldest in the Bible, speaking of the extensiveness of God’s mercy.

If there is such significance in Methuselah’s name, let’s examine the other names to see what may lie behind them.

Adam’s son was named Seth, which means appointed. Eve said, “For God hath appointed me another seed instead of Abel, whom Cain slew.“4

Seth’s son was called Enosh, which means mortal, frail, or miserable. It is from the root anash, to be incurable, used of a wound, grief, woe, sickness, or wickedness.

It was in the days of Enosh that men began to defile the name of the Living God.5

Enosh’s son was named Kenan, which can mean sorrow, dirge, or elegy. (The precise denotation is somewhat elusive; some study aids unfortunately presume that Kenan is synonymous with Cainan.)

Balaam, looking down from the heights of Moab, uses a pun upon the name of the Kenites when he prophesies their destruction.6

We have no real idea as to why these names were chosen for their children. Often they may have referred to circumstances at birth, and so on.

Kenan’s son was Mahalalel, from Mahalal which means blessed or praise; and El, the name for God. Thus, Mahalalel means the Blessed God. Often Hebrew names include El, the name of God, as Dan-i-el, “God is my Judge”, etc.

Mahalalel’s son was named Jared, from the verb yaradh, meaning shall come down.7

Jared’s son was named Enoch, which means teaching, or commencement. He was the first of four generations of preachers. In fact, the earliest recorded prophecy was by Enoch, which amazingly enough deals with the Second Coming of Christ (although it is quoted in the Book of Jude in the New Testament):

Enoch also, the seventh from Adam, prophesied of these, saying, “Behold, the Lord cometh with ten thousands of his saints,

To execute judgment upon all, and to convince all that are ungodly among them of all their ungodly deeds which they have ungodly committed, and of all their hard speeches which ungodly sinners have spoken against.”
Jude 14, 15

Enoch was the father of Methuselah, who we have already mentioned. Enoch walked with God after he begat Methuselah.8 Apparently, Enoch received the prophecy of the Great Flood, and was told that as long as his son was alive, the judgment of the flood would be withheld. The year that Methuselah died, the flood came.

Enoch, of course, never died: he was translated 9 (or, if you’ll excuse the expression, raptured ). That’s how Methuselah can be the oldest man in the Bible, yet he died before his father!

(This name is also linked to the Lamech in Cain’s line who inadvertently killed his son Tubal-Cain in a hunting incident.10)

Lamech, of course, is the father of Noah, which is derived from nacham, to bring relief or comfort, as Lamech himself explains in Genesis 5:29.

Now let’s put it all together:

Man (is) appointed mortal sorrow; (but) the Blessed God shall come down teaching (that) His death shall bring (the) despairing rest.

Here’s the Gospel hidden within a genealogy in Genesis!

(You will never convince me that a group of Jewish rabbis conspired to hide the Christian Gospel right here in a genealogy within their venerated Torah!)